Marijuana plants usually come in male or female versions. But sometimes a female plant shows primitive or even fully developed male floral structures that can pollinate female buds on the same plant and other plants. These sexually confused plants are called hermaphroditic (or hermie).

You’re very wise to pay close attention to your buds as they mature to see if hermie floral clusters show up, because seeded hermie buds suck.

The good news is that although some hermaphroditism is genetic and almost impossible to avoid, hermaphroditism is also caused by avoidable plant stress. So in some cases, if you fix your growing procedures and environment, you can eliminate the hermie flowers and avoid having pollen in your grow op.

It helps to know exactly what you’re looking for. So take a close look at the main photo for this article of a plant 21 days into bloom phase.

The top half of the photo shows the white pistils and other structures normal for an unpollinated 100% female flower.

The bottom half shows male floral clusters that have already broken open and dispensed pollen that seeded female flowers on the hermie plant and buds of other plants.

The male and female floral structures are usually separated from each other (as shown in the photo). There’s normal female bud above; below it (sometimes separated by a stalk node or at least 1/8th inch or more distance), you see fully-developed male flowers.

These structures can be very difficult to see because they might not be as tall as the female bud’s white pistil hairs. Sometimes they’re embedded deep inside a thick female bud so you can’t even see them from the surface.

The nanners are usually no more than 1/16th to ¼ inch long, and can appear singly or in clusters. Clusters of nanners look like a miniature stalk of bananas on a banana tree.

Take a look amongst the white pistil hairs slightly to the left of top-center in this bud photo, and elsewhere, and you’ll see the dastardly nanners! 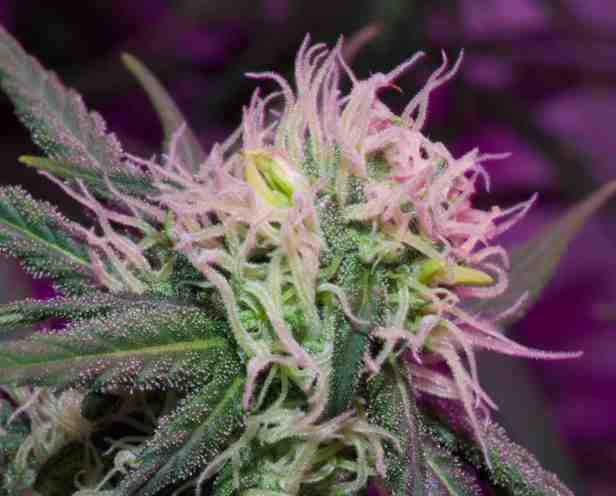 An important difference between fully-developed hermaphroditism and nanner hermaphroditism is that a primarily female plant with a significant number of fully-developed male flowers is most often caused by inherent genetics, not just plant stress. Indeed, hermie genetics strains often develop male and female flowers on the same plant even in the best grow room conditions.

In contrast, nanners are mostly caused by plant stress and other unfavorable conditions. Genetics plays a role, but a much smaller role.

“Many growers have had their hearts broken growing strains that might be otherwise desirable, but have the tendency to go hermie,” explains “Paul the Pro Breeder,” who founded and runs legendary North American seed breeding consortium New420Guy Seeds.

“I make sure every strain we sell has been rigorously tested to ensure it doesn’t have inherent hermie traits, and is totally resistant to stress-triggered hermie issues,” Paul explains. “Sadly, some other seed companies don’t have that rigorous process. They sell growers seeds that carry covert flaws such as hermaphroditism, so growers end up with seeded buds instead of happy harvest. Fortunately, that doesn’t happen with our seeds.”

When a grower is confronted with the type of hermie plant shown in the main article photo, the grower can be pretty sure the plant’s genetics are fatally defective. It would be worthless to grow those genetics again, or to breed with them.

In contrast, plants with nanners may revert to 100% female’ floral structures when plant stress is eliminated, especially during early bloom phase.

The bottom line is: when you have a multi-strain grow room, with all plants experiencing the same conditions, and only one strain develops hermie traits in two or more ideal growing seasons, assume that the strain has hermie genetic tendencies and is to be avoided at all costs.

Detect and Prevent Hermie Marijuana From Happening to You!

Now let’s take a look at how to prevent and detect and hermie marijuana plants:

What to do if you see nanners or male floral clusters on your female marijuana plants? Your tactics vary depending on your grow room set-up, when in bloom phase you detect the hermie structures, and what crop outcomes you can tolerate. Here are some case studies that offer strategy tips:

Case Study A: The grower had a normal bloom phase until the last two weeks of an expected 9-week duration, when he first saw nanners in a few female buds. He saw no brown pistils or seed development. Knowing he’d be harvesting soon, he did nothing. He harvested the buds and when grading them discovered no seeds had formed.

Case Study B: The grower saw nanners early in bloom phase on two plants from the same strain in a mixed-strain grow room. He made sure his grow room environment and plant inputs were optimized, spent a half hour per day inspecting plants for signs of pollination, and used tweezers to pluck off all nanners and the tiny parts of buds that showed pollinated pistils.

After initial removal of all nanners, one plant never developed nanners again. He successfully harvested large, potent, unseeded buds from this plant.

But the other plant continued to develop new nanners. The grower put it outdoors and let it grow until it was ready to harvest. The buds were partially seeded, but resinous and tasty. He used those buds to make extracts.

Case Study C: A grower was cultivating pure Sativa genetics. The strain breeder had warned the grower about possible hermaphroditism starting in the middle of bloom phase. At 10 weeks into an expected 13-14 week bloom phase, male flowers developed.

The grower isolated the hermie plant in a grow tent, and plucked the male flowers off on a daily basis. He lightly sprayed the affected stalks with water, because water is known to disable pollen, not just wash it away.

He harvested about a week earlier than he’d have preferred, and found the buds to be potent, tasty…but about 35% seeded. The unfortunate thing is that other plants in the grow room were also partially seeded by the hermie pollen.

Case Study D: A grower was manually controlling his bloom phase lights on and off, rather than using an automatic timer, and doing a poor job of it. His light control timing was so inconsistent—his poor cannabis plants were stressed by varying lengths of light and dark per day.

They developed nanners in week three of bloom phase.

We advised the grower to put his lights on a timer and ensure a strict 12 hour on/12 hour off formula, with the same start and stop time each day. He removed the nanners for seven days as the plants got used to the predictable light cycle. Then, his plants stopped producing nanners and were 100% female until harvest.

His harvested buds were only 3-5% seeded. In subsequent grow ops, the same strain was grown; without light cycle stress, no nanners were observed.

As you can see, marijuana growers are willing to work hard to detect and stop hermie structures from seeding their buds. They’d rather not have to get rid of a bloom phase plant if they can avoid it.

However, to be 100% sure you won’t end up with a seeded grow op, the safest strategy is to get rid of hermie plants immediately, and make damn sure that non-hermie plants in the same proximity haven’t been seeded.

Please watch the following fantastic video to get more understanding of hermaphrodite marijuana!

This entire website, all photos, headlines, text and other information, is copyrighted intellectual property and can’t be reproduced except with the explicit permission of Growing Marijuana Perfectly.