I’ve spent at least $11,900 on grow lights and bulbs during my marijuana growing career, and I’m embarrassed to admit a lot of that money was wasted.

I started growing before LED grow lights existed. High intensity discharge (HID) metal halide and high pressure sodium bulbs were the professional grower’s only choice. When LED and plasma grow lights entered the marketplace, I bought them too.

But because I lacked understanding of what light is and how cannabis plants respond to it, I made grow light errors that harmed my cannabis plants, wasted electricity, and decreased harvest weight and potency.

I tested all major brands of HID grow bulbs, reflectors, and ballasts, and LED grow lights. I read books and research papers on “photobiology,” the science of how living organisms respond to light. I spent hours networking with other growers, visiting grow ops large and small, adjusting my grow light height and placement, installing light movers.

And yet, it wasn’t until I contacted Dr. Bruce Bugbee, a professor of crop physiology in Utah State University’s Department of Plants, Soils and Climate, that I found a statured scientist researching about cannabis, photobiology and grow lights.

Bugbee is the world’s leading expert on the photobiology science that matters most to cannabis growers. He runs a university research lab in collaboration with NASA, trying to figure out how to grow plants on Mars. He’s also founded the world’s most innovative horticultural metering company, called Apogee Instruments.

Bugbee has received numerous awards from governmental and academic organizations. He’s authored hundreds of scientific journal articles, a dozen books or book chapters, and his university students love him. Watch the videos embedded in this article, and you’ll see a serious, pioneering scientist explaining his proprietary photobiology research, which includes cannabis research.

This esteemed professor is the leading photobiology scientist to capitalize on federal hemp legalization in the USA for cannabis research purposes.  He has permits from the Utah Department of Agriculture and Food to grow low-THC cannabis for research. He and his team create precise experiments in which every environmental condition, plant input, and plant outcome is carefully controlled, measured, and logged. Bugbee’s ultimate goal is to find out exactly how to use light to make cannabis plants do what you want them to do. If anybody can do it, he can!

Dr. Bugbee’s videos inspired me to do research into grow lights and photobiology that provided immediately significant benefits in my grow room, so I want to share with you the following foundational knowledge:

Now that you’ve had a short course in photobiology and photon physics, let’s talk about how you integrate this knowledge into your marijuana grow op. The first thing to realize is you need an accurate, reliable PFD meter.

Before I found Dr. Bugbee, I spent a lot of money on lumens meters, PAR meters, and when they became available later, on PFD meters. Most of these meters were in the $150-300 price range. Many of them were just not reliable, and their manufacturer’s warranty and tech support were inferior and frustrating.

Years ago, when Dr. Bugbee realized that photobiology science was a vast, amazing unexplored universe, he also realized he didn’t have the precision technology he needed for exploring it. So he sat down at his kitchen table and started making his own horticultural meters. When the kitchen table got too crowded with electronica, his venture spilled over into the garage.

Bugbee is a perfectionist zealot when it comes to making proprietary, cost-effective instrumentation for scientists and growers that meet his own rigorous performance standards in the field and the lab. His research and development team has taken metering science and product design to stellar levels of performance, longevity, accuracy, ruggedness and usefulness never seen before. Now Apogee instruments are the brand of choice for plant scientists around the world. There are at least 100,000 Apogee meters in use right now.

As a marijuana grower who wants complete mastery of my grow light choices and use of grow lights, I realized I needed three different Apogee meters.

I rely on professional LED grow lights for almost all my indoor gardening (except when I’m testing HID grow lights). Apogee’s SQ-620 meter is designed only to be used with LED grow lights. It measures an astounding 340-1040 nm range, far beyond the range of visible light and so-called PAR. It doesn’t give you a PPFD reading, because it measures electromagnetic radiation beyond the photosynthetically active spectrum. Instead, you get a photon flux density (PFD) reading.

Among the obscure but important benefits of the SQ-620 is it detects near infrared light created by security lights and cameras; in grow rooms, infrared from these sources light might be interfering with desired hormonal signaling during bloom phase.

If you’re using HID grow bulbs and want to measure light in the traditional PAR spectrum, Apogee offers PAR sensors like the MQ-500 that measures light in the 382-692 nm range.

Another wonderful meter that isn’t absolutely required for indoor growing but is very interesting to use is an Apogee spectroradiometer. If you’ve ever seen those colored graph charts on some HID bulb boxes and on LED grow light product pages, illustrating the spikes and valleys of nanometer output across the electromagnetic spectrum, you’re seeing a static version of what Apogee’s SQ-110 and SQ-120 spectroradiometers can give you dynamically in real time.

One great thing about having all these Apogee instruments is you’re no longer at the mercy of the feckless grow light and grow bulb manufacturers in what you know about what their gear is doing. Apogee meters show me that what the grow light manufacturers have told me about light-to-canopy distance, PPFD, PFD, and spectral output are always inaccurate. Sometimes by a lot, sometimes by a little, but always enough to make a difference in my grow room.

For example, when I complied with a grow light manufacturer’s instructions on light-to-canopy distance with a particular LED grow light, my leaves were bleached and burned. The Apogee meter showed I was overdriving the plants and should raise the lights way higher than what the manufacturer said to get a PFD that wasn’t damaging the plants.

Apogee meters also reveal to me the drastically differing PFD levels at the same distance from the light but in different places under the light. Case in point…a grow light manufacturer’s PFD light distribution chart for a particular model showed relatively equal distribution of 350-450 PFD at a certain distance over a 16-square foot coverage area.

But using Apogee meters, I saw that directly under the light the reading was 500 PFD, whereas just 14 inches from the center of the light fixture but at the same distance to canopy, the PFD had dropped to 277.

As I took Apogee spot readings across my canopy, I was dismayed to learn that this expensive grow light didn’t give 16-square feet of adequate PFD, and that there were hot spots and dark spots that I had to accommodate for in placing my plants. When I contacted the grow light manufacturer, they were defensive and gave me pushback and hostility, leading me to never recommend or buy another product from them. 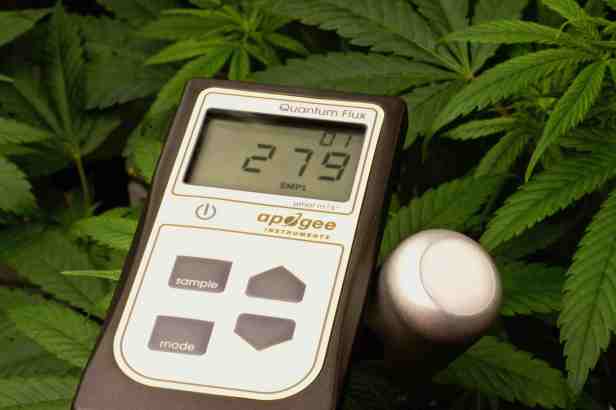 There are many reasons that scientists and serious marijuana growers turn to Apogee instead of other companies for instrumentation. One reason is Apogee products are designed and their manufacture supervised by a statured photobiologist and plant scientist who is researching cannabis. Bugbee and his company are the only people in the world offering instrumentation designed partly based on cannabis testing.

Another reason is that Apogee instruments are absolutely solid in design, workmanship, ease of use, utility, flexibility, data-logging, and warranty. The workmanship and materials warranty is four years, which is an astoundingly long warranty for any electronica, especially complex professional metering devices.

Data-logging? Yes! You can transfer oodles of data from most of these meters into your computer and, using software provided by Apogee, calculate daily light integral and do many other calculations and analyses that give you the most in-depth understanding of the electromagnetic radiation affecting your plants.

Another Apogee plus is that their team are all thrilled to be working for Dr. Bugbee and have a friendly, professional, enthusiastic dedication to grower satisfaction.

I urge you to watch the videos embedded in this article because in them Dr. Bugbee gives you a free, university-level photobiology course that will immediately improve your use of grow lights, make your plants grow faster, shorter, sturdier and be more productive, save you money on electricity use, and maximize every grow light watt you pay for.

Bugbee’s videos provides a proprietary, valuable description of the dynamic, interactive links between your feed program, carbon dioxide levels, water volume and quality, number of hours of light per day, and other factors that affect photosynthesis and overall plant health and performance.

It isn’t often that a statured scientist focuses on cannabis, and it couldn’t have happened without the gradual cannabis and/or hemp legalization in America at the federal and state level. Dr. Bugbee is the leading cannabis photobiology pioneer, and any grower using grow lights will see multiple marijuana growing benefits by contacting Apogee today to see how Apogee gear and knowledge improve plant health, harvest weight, and cannabinoid/terpenoid potency in your grow op.

This entire website, all photos, headlines, text and other information, is copyrighted intellectual property and can’t be reproduced except with the explicit permission of Growing Marijuana Perfectly.